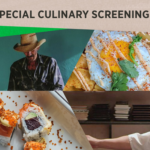 The first evening of Miami Film Festival’s Culinary Series Program presented by Miami Design District will begin on Saturday, March 6th with a screening of East Side Sushi, the story of a single mother, Juana, who stumbles into the high-energy, male-dominated world of Japanese cuisine. It is here that a whole new world of cuisine and culture are discovered, far-removed from everything she has ever known. Following this screening, guests will head over to Itamae for a special curated menu of some of the restaurant’s greatest plates.

On Sunday, March 7th, Miami Film Festival will screen Asori Soto’s documentary, Cuban Food Stories. Diverse cuisine is rarely counted among the cultural phenomena for which Cuba is celebrated. A richly comprehensive remedy for this misperception, Cuban Food Stories visits every province in the country to sample a culinary legacy grounded in so much more than rice and beans. Following this screening, guests will head over to Caja Caliente for a special curated menu of their favorite offerings. All dinners will be accompanied by complimentary Estrella Damm beer, the Official Beer of Miami Film Festival.

Thursday, January 18, 6pm-7:30pm – abaco Wines & Wine Bar, 140 Northeast 39th Street, Suite 206, Miami Design District Come join for an evening of fine art and fine wines. Abaco will be tantalizing all your senses with a tasting selection of some of the best that the wine world has to offer, gourmet hors d’ouevres […]

Friday, March 30, 5-9pm – The Stage Miami, 170 NE 38th Stree, Miami Design District The time has finally come for the official Miami Society of Youth Philanthropists Launch Party at the Stage! Join for the best Happy Hour in Miami and for an amazing cause. Drink and Food Specials until 9:00 PM. The purpose […]

Wine and Dine by the Bay