Overspraying continues to be a major issue in the U.S.Â According to a recent national Old Spice survey, 90 percent of students (male and female) have been bothered by too much body spray at school. Even more revealing â€“ 68 percent of young guys say they were not properly taught how to use body spray.

At 11 a.m., Mustafa made a â€œpit stopâ€ to Coral Gables Senior High to host an in-school assembly. Greeted by high-energy cheerleaders and the schoolâ€™s band, more thanÂ 500Â students engaged in an interactive presentation highlighting how the power of scent, as well as the importance of overall body cleanliness, can build self-confidence and be a strong personal motivator. The event concluded with Mustafa awarding the school aÂ $2,500Â donation to schoolâ€™s athletic department.

At 1:30 p.m.,Â Old Spice hosted a pop-up pep rally at UM with a live performance by the Spirit Squad, the schoolâ€™s resident dance team and cheerleaders, product giveaways, games and selfie photo opps with Mustafa.

A former wide receiver for the NFL, Mustafa gained sudden and substantial fame as the result of his Old Spice viral/TV campaigns, which garnered hundreds of millions of online hits and transformedÂ Mustafa into a widespread sensation that culminated in an Emmy win for â€œBest TV Commercial.â€ In January 2014, Mustafa made his triumphant return as â€œThe Old Spice Guyâ€ for a series of digital â€œInternet-ventionsâ€,Â designed to end the mostÂ embarrassingÂ male mistakes. 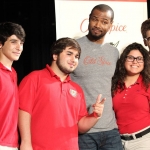