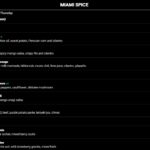 Chotto Mate features the best of Nikkei, which is Japanese-Peruvian culinary fusion with bold, striking colors and tempting taste sensations, entwining two culinary traditions in a lively combination of ingredients and techniques. Nikkei refers to the descendants of Japanese immigrants who left their country and lived in other parts of the world. At the end of the 19th century, there was a treaty between Japan and Peru, and about 800 Japanese workers traveled to work in Peru, which now has the second-largest Japanese diaspora group located in South America. As a result, Japanese food and culinary techniques have deeply influenced the traditional Peruvian cooking style.

The two cultures share a passion for fresh fish and seasonal ingredients, with Japanese sushi and sashimi and Peruvian ceviche central to this fusion cuisine. Thanks to their noted chef, Jordan Sclare, Chotto Matte is internationally renowned for its artistic approach to this extraordinary cuisine.

The flavors pop in your mouth, engaging your tastebuds in bold, unexpected ways. We tried the Lychee Ceviche V and Salmon Tataki to start. The Salmon Tataki was thinly sliced, and the combo of spicy mango salsa, crispy filo and cilantro gave it unique, unexpected flavors, while the Peruvian hot spices are unmistakable in the Lychee Ceviche. Leche de tigre – literally “tiger’s milk” – the citrus-based, spicy marinade used to cure the fish in classic Peruvian ceviche – made it extra spicy and a good choice for those who like it hot!

For Mains, we chose Ebi Tempura Roll, a sushi roll with crispy shrimp and a vivacious combination of flavors, and Asado de Tira, slow-cooked beef with zippy BBQ flavor on a base of Peruvian purple potatoes. Both were excellent choices. We were happy to see there was also a vegetarian offering, the Vegetable Tempura VG.

There were two choices for dessert, the chocolate brownie, which resembled a loaded ice cream sundae with mango chilli and lime sorbet, crowned with a delicious mixed berry coulis; and the Strawberry Garden, a strawberry crema with a luscious mouthfeel, featuring stimulating bursts of wild strawberry granita. @ChottoMiami

CLICK HERE TO VIEW THE MENU AND MAKE RESRVATION

Saturday, September 8, 7-10pm – Bass Museum of Art, 2100 Collins Avenue, Miami Beach Join George Lindemann, President of the Board, and Silvia Karman Cubina, Executive Director of the Bass Museum of Art, for the Opening Reception for Unnatural. Exhibition artists will lead a tour of the exhibition from 8 to 8:30 p.m. Unnatural was […]

“The Summer SoirÃ©e” Champagne Dinner with Friends at Tosca

Wednesday, August 14, 7pm-10pm – Tosca, 210 23rd Street, Miami Beach Digest Miami invites you to experience an intimate four-course champagne dinner at Tosca. Laurent-Perrier will curate the evening with a selection of their finest champagnes including their coveted grande cuvÃ¨e, Grand SiÃ¨cle. Tosca is the perfect setting to blend the refinement of Laurent-Perrier and […]