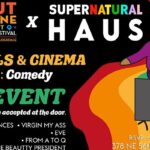 Cocktails + Cinema is back… a FREE Movie Happy Hour presented by OUTshine Film Festival for the community! As part of the 23rd Annual OUTshine LGBTQ+ Film Festival Miami Edition, we’re partnering up with Supernatural Haus to bring to you another in-person event where you can chat & mingle more with your fellow film buffs & filmgoers!

For April, we share some short, yet comical LGBTQ+ stories curated just for the OUTshine LGBTQ+ Film Festival – Miami Edition! during our OUTshine Cocktails & Cinema Night: Comedy Shorts! Join us early for some drinks and music starting at 7:00pm in the lounge before grabbing a comfy seat in the gallery theater to watch a selection of short films at 8:15pm!

SOcial League Happy Hour for a Cause

Thursday, August 11, 7pm-9pm – Gramps, 176 Northwest 24th Street,Â Miami Wynwood Arts District Join the SOcial League for drinks, food, and DJ! For a $15 donation (tax-deductible) you will get to interact with other locals and enjoy the vibe of like-minded people coming together in one place. #â€ŽSOcialLeageMIAâ€¬ â€ª#â€ŽSpecialOlympicsâ€¬ @soflinfo CLICK HERE TO REGISTER 0

Brickell Beach Bash at The Hoxton

Saturday, June 8, 6pm -Â The Hoxton, 1111 SW 1st Avenue, Miami When you can’t make it to the shore, The Hoxton will bring the shore to you. Ocean Drive Magazine hosted a “Brickell Beach Bash”, a summer happy hour featuring cocktails by Veev, infused with casual camaraderie and garnished with a Hamptons-style twist,Â and fashion presentation […]