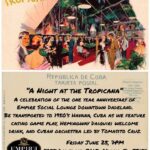 Tuesday, May 30, 7pm-11pm – El TucÃ¡n, 1111 Southwest 1st Avenue, Miami Join for an evening celebrating El TucÃ¡n Miami’s resident songstress, Yoli Mayor! We couldn’t be prouder of Yoli Mayor as debuts on Season 12 of “America’s Got Talent.” Simon Cowell says, “she could be a contender to win the whole show now.” Starting at 7 […]