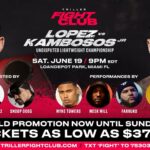 Triller Fight Club is changing the face of boxing, galvanizing an entire new generation by combining legendary heavyweight match-ups and huge music talent to create experiences that are imprinting on the cultural zeitgeist that has never been seen before, and now it’s coming to Miami. On June 19th, Triller’s next spectacular and unprecedented event, including a blockbuster concert, will take place in Miami, hosted by Mario Lopez and Snoop Dogg.

The concert, which kicks off at 6:00 PM EST, precedes the most exciting, thrill-packed fight event of the year, which will also offer entertainment between fights once the fight card starts. The evening will also feature a surprise performance of a never-before-seen and never-seen-again duet.

The event will be a four-hour extravaganza of music, dancing, a world-class pyrotechnics display, some of the biggest boxing matches ever to be in a show produced by the visionary producer Nigel Lythgoe of So You Think You Can Dance and American Idol.

Prices range from $50 to $3,000 and include options from VIP ringside seats to traditional seats in the stadium (Home of Miami Marlins) upper and lower bowls, as well as seats near the two entertainment stages on either side of the ring, positioned at the pitcher’s mound.

Talk: Between Data and Metaphor

Monday, December 12, 7pm-9pm – ArtCenter/Downtown, 1035 N Miami Ave, #300, Miami Join “Between Data and Metaphor,” a conversation with artist Mark Koven, our first ARTSail resident, Patricia and Phillip Frost Museum of Science marine biologist and environmental educator Fernando Bretos, and The Impossible Dream Captain Will Rey. The talk will be moderated by independent curator and […]