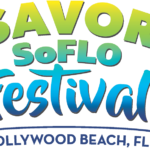 The inaugural SAVOR SoFLO  a food and wine festival that has expanded its series to South Florida, kicked off its inaugural event June 5th and 6th. The two-day festival featured acclaimed brands and restaurants, popular breweries, and outstanding selection of wines, all within the giant Grand Tasting Village nestled on quintessential Hollywood Beach.

Tickets to the Grand Tasting Village provided access to South Florida’s most interesting culinary establishments and is the top choice for food, wine, and craft beer aficionados. Guest enjoyed fabulous tastings from the area’s most delicious restaurants, and world-class hotels. Also, tasted wines from across the State and the globe. Enjoy the best local and national craft brews. SIP, SAVOR and be SEEN under the giant Grand Tasting Village nestled on one of South Florida’s most beautiful beaches.  #SavorSoFLO @savorsoflo

June 12 – 16, Loews Miami Beach Hotel, 1601 Collins Ave, Miami Beach The American Black Film Festival (ABFF) is an annual event dedicated to empowering black artists and showcasing quality film and television content by and about people of African descent. Committed to the belief that diverse artists deserve the same opportunities as their […]