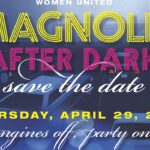 United Way of Broward County’s Women United is celebrating the 10th anniversary of its Magnolia events with its in-person “Magnolia After Dark ― Engines Off, Party On!” Dominique Dawes, three-time Olympic gymnast, Olympic gold medalist, a member of the gold-medal-winning “Magnificent Seven” team, and the first Black gymnast to qualify for the Olympic games, served as the keynote speaker. Cathy Donnelly was honored as the Woman of Inspiration and Jamie Hagar as the Woman of Promise.

All proceeds from ticket sales will benefit United Way of Broward County as they tackle the most complex, critical challenges and create long-lasting positive change in our community.  #UnitedWayofBroward #LIVEUNITEDBroward @UnitedWayBC

Thursday, January 24, 6pm-11pm – One Door East, 620 S Federal Hwy, Fort Lauderdale   A Night for the Senses at Ft. Lauderdale’s hottest eatery and cocktail bar – One Door East. Live Art by local acclaimed artists to the sounds of legendary DJ Rokwell is only the beginning. Get into the evening vibes with some bites […]