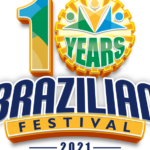 For ten years, the South Florida Brazilian Festival has aimed to promote a message of global unity. This multicultural festival typically gathers a diverse crowd of thousands, features global cuisine from a wide range of local restaurants, dozens of exhibitors, a kids zone, Footvolley tournament, skate ramp exhibition with a ramp raffle with live performances by well known artists, musicians and dancers. The festival is the Southeast region’s largest multicultural festival.

Headline band, Smash Mouth, will also be celebrating a major anniversary this year as 2021 marks 20 years since the blockbuster release of “Shrek” and Smash Mouth’s eponymous third (GOLD) album in 2001. For the festival, the band plans to play all their fan favorites in addition to their brand new single “Camelot” released in May of this year. The song is a creative collaboration between Smash Mouth and Timmy Trumpet, one of Australia’s beloved DJs known for mixing jazzy trumpet and bright piano with electronic dance music.

While Smash Mouth will be the star Saturday night, Brazilian dance-house DJ Bruno Martini will close out the concert Sunday. Martini has seen a meteoric rise with roughly 1 billion streams on Spotify. He has produced music with Timbaland, Lady Gaga and Katy Perry. Two Latin Grammy-nominated musicians, Paula Lima and Vitor Kley, will also perform. Popular Radio Host, Paula Lima, a judge on Brazilian Idol and a Samba superstar, will grace the stage for an energetic, funk concert Saturday. Brazil’s trailblazer and pop-prodigy in Portugal, Vitor Kley will also perform on Sunday. Tickets to this year’s festival can be purchased online for only $10. Kids under the age of 12 are free.

Friday, October 30, 6:30pm-9pm – Galleria Mall, Sunrise Boulevard, Ft Lauderdale The Salvation Army in Broward County has been helping people restore, rehabilitate and redesign their lives since 1926. As a way to bring attention to their work and raise additional funds for helping homeless families, they have created the Red Shield ReDesign Bash. The […]

Risk Transformed: The Celebration of a New Community

Sunday, June 9, 3pm-6pm – 1310 Gallery, 1310 SW 2nd Court, Fort Lauderdale Transforming Risk is about redefining what stands in the way of you living the life you want.Â  JoinÂ them at their closing celebration. Meet some of the community who have answered questions, and look at how the space has changed. JoinÂ Transforming Risk as […]