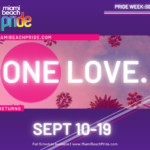 In addition to hosting the adored festival and parade, Miami Beach Pride has one-upped themselves with an unmissable programming calendar for Pride goers of all identity; allies, advocates, and letters of the rainbow flag. Kicking off the festivities on Friday September 10th, Pride Light the Night Flip the Switch event illuminating 1111 Lincoln Road in pride’s rainbow assortment of colors. This initiates a full week of parties, art shows, performances, fundraisers, and vogue battles like Monday the 13th’s Queer Art Showcase at the Eden Roc, or Thursday’s Legends Ball: a Voguing Competition brining Florida’s and the nation’s top Vogue Houses together in Miami for an epic competition! #LGBTQ @MiamiBeachPride

Sunday, April 27, 4pm-8pm – Catalina Hotel and Beach Club,Â 1732 Collins Avenue,Â Miami Beach Fashion Happy HourÂ is a monthly event that brings bloggers, boutique owners, designers, and fashion enthusiasts together to network while having a great time. Expect great music, drink specials, lots of fashion, and many surprises every time you go to a Fashion Happy […]