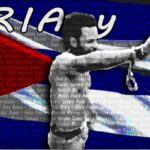 Museum of Graffiti and The San Isidro Movement, members of Cuban society in the diaspora, artists and activists invite you to the event “We are Connected!” In solidarity with the political prisoners in Cuba, there will be performances by Ras Sandino, Serum, Apex305, Jah The Poet, Legacy and more. The Cuba we dream of we are building from art and civics every day.

The evening will feature an art auction curated by Meta4. All the artwork has been donated by each respective artist for the cause. The artwork being offered for auction consists of an eclectic mix of mostly Cuban American and Cuban Immigrant artists which include: some of Miami’s well known Old-School (80’s) Miami graffiti writers most of which have offered their art to the community throughout the decades. A selection well known contemporary graffiti artists and a wide spectrum of influential artists, photographers and muralists from Miami, NY, Texas, and the West Coast that have joined the The San Isidro Movement call for solidarity with Political Prisoners in Cuba. Tickets for the event are $15. #WeAreConnected #PatriaYVida @museumofgraffiti