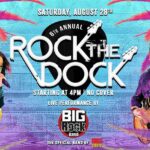 Shooters Waterfront is proud to bring back the 6th annual Rock The Dock on Saturday, August 28th starting at 4 p.m. This summer soiree will take place on Shooters Waterfront’s expansive turf, and the party will span the venue’s 4,000+ sq. ft. of picturesque waterfront space, offering a scenic location, with performances by Brothers of Others and Big Rock Band. This event is free and open to the public and offers complimentary dockage for boaters.

This event will kick off with an opening performance by Brothers of Others, a South Florida rock and roll trio that showcases each member’s musical skills by rotating effortlessly between instruments. This band always gets the crowd on their feet, whether it be with their original composition or an energetic acoustic performance.

Following Brother of Others performance, Big Rock Band will take the stage as an 8-piece cover band putting their own spin on classic rock from the 70’s through today. Big Rock Band is known to be a leader in the party-rock revolution with their distinct high-energy performances. Guests can enjoy these classic rock performances as they indulge on food and drinks, all with views of the sparkling Intercoastal Way.

Shooters Waterfront proudly embodies the memories and historic spirit of good times, great food and incredible views of the Intracoastal Waterway. After the 2014 remodel, Shooters reemerged as a destination restaurant with a modern look and new menu serving as Ft. Lauderdale’s best take on waterfront dining. The new ownership has successfully revitalized the restaurant while preserving Shooters’ one-of-a-kind atmosphere that loyal customers have come to know and love. From the sophisticated outside lounge to the contemporary dining room accompanied by three state-of-the-art bars, patrons can enjoy scenic Intracoastal Waterway views from day into night. #ShootersWaterfront

Rock with our DJ in your PJs

Thursday, October 5, 5pm-8pm – 111 E Las Olas Blvd, Fort Lauderdale If you want to have fun with a good cause then come join this year’s 5th Annual Block Party For Higher Education. You can meet new faces, see art showcases, have fun with family activities, and bring everyone you know! The annual Block Party […]