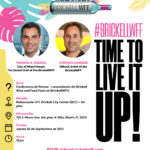 The Miami Brickell Chamber of Commerce is proud to bring The Brickell Wine and Food Festival for the first time to be held in the Brickell neighborhood in the City of Miami on the dates of November 17-21, 2021. #BRICKELLWFF

“Wheels from the Heart” Grand Opening and Anniversary Party

Thursday, October 16, 5pm – 7:30pm â€“ Berkshire Plaza, 1088 S. Rogers Circle, Boca Raton Join the Delray Beach Ribbon Cutting for the organization “Wheels From The Heart“, conducted by the Greater Delray Beach Chamber of Commerce. They are committed to providing reliable transportation to single mothers in need.Â Active members of the Chamber and the […]