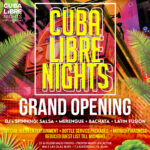 Even before the dance floor opens, dinner guests each Friday and Saturday will get a taste of nightlife with professional salsa dancers performing tableside beginning at 9 p.m. At 11 p.m. these same dancers usher in “Cuba Libre Nights” and invite guests to dance with them as they officially open the dance floor to guests. Guests can look forward to dancing the night away to the sounds of salsa, merengue, bachata and Latin fusion by resident DJs DJ Xander spinning on “Rumba Fridays” and DJ Joey Tracks playing on “Bailamos Saturdays” until 3 a.m.

‘Cuba Libre Nights’ is launching in celebration of National Hispanic Heritage Month (September 15 – October 15). As part of the month-long celebration, guests are invited to raise a glass to freedom as Cuba Libre debuts its new “Esperanza Sparkling Mojito,” a limited time offering crafted by Cuban-born and Miami-bred master mixologist and U.S. Ambassador for Bacardi’s Havana Club brand rum, Giovanny Gutierrez. A portion of the proceeds from the sales of the new cocktail will benefit Cuba Decide, a non-profit, non-partisan citizen driven organization working to bring change to Cuba’s political system. In addition, patrons can also take advantage of a special three-course menu ($35 per person) for Dine Out Lauderdale until September 30, as well as enjoy a special prix-fixe “Esperanza” menu ($39 per person) featuring decadent aperitivos (starters) like pineapple guacamole cubano, tuna ceviche nikkie, Mama Amelia’s empanadas and more, platos fuertes (main entrees) like ropa vieja, vaca frita and Cuban roast pork, plus the choice of a delicious dessert, including tres leches cake and Cuban flan, from October 1 through October 15.

“Cuba Libre Nights” is open to guests 23 and older. A cover charge and dress code apply for those entering after 11:00 p.m.

July 15 â€“ October 15, Hellman Holistic Health, 3020 NE 32 Avenue, Suite 319, Fort Lauderdale For the first time ever, Dan Hellman is offering group fitness classes such as boot camp, myofascial stretching, ELDOA and abs. However, these are no ordinary classes, they are medically based and scientifically proven classes to get results without […]