Miami Heat NBA champions Dwayne Wade and his charity, Wadeâ€™s World Foundation; along with teammate, Chris Bosh and his charity, Team TomorrowÂ c0-hosted the VIP party to raiseÂ more than $32,000 for respective charities. â€œHeat Waveâ€ VIP party, in celebration of the four-day exhibition of Art of Basketball: Heat Wave, saw Miami HEAT NBA champions Dwyane Wade and Chris Bosh truly in their element of giving. The night peaked when Bob Drinon, president and CEO of Premier Beverage Company and his wife, Susan, presented Wade and Bosh with a check in the amount of $15,000 for the Wadeâ€™s World Foundation and Boshâ€™s Team Tomorrow, Inc. respectively. Additionally, two pieces of art created by Billi Kid and Joe Iurato were presented to each of the players. The Miami HEATâ€™s own, DJ Irie was in charge of the musical backdrop as more than 500 guests indulged in burgers, shakes and fries compliments of Shake Shack.
The Art of Basketball exhibition is produced by the Public Works Department and curated by artist Billi Kid. The exhibition paid homage to the Miami HEAT and their recent NBA Championship win. The exhibition featured a select group of renowned graffiti and street artists who have created portraits of the teamâ€™s players – notably Wade and Bosh. Each piece was created from the most iconic symbols of their championship season, re-imagined NBA backboards and the 2011 NBA All-Star Game floor boards. 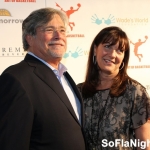 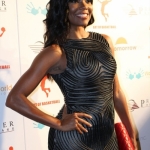 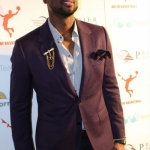 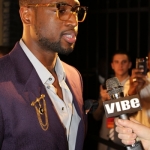 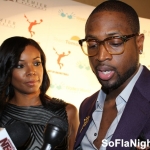 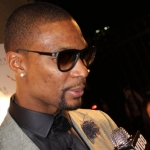 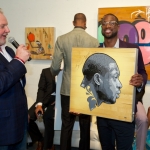