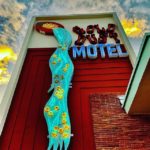 Playing off the art deco vibes of the neighborhood, the motel style of the hotel, and the relaxing water view, this funky cafe open daily for lunch and dinner will transport guests to their very own Miami Riviera. In typical Kush style, the cafe’s walls are adorned with vintage thrift shop decor and a collection of personal artifacts from Matt’s family (a vintage French hat box and book of sauces just to name a few). These carefully selected items create a unique vibe and add a sprinkle of Paris flare, translating the restaurant into a Euro style river cafe with a bit of 305 in your face.

Dishing up bistro classics such as French onion soup, ratatouille and frog legs as well as Kush classic burgers, chicken n waffles and key lime pie this restaurant gives you the best of American and bistro cuisine. In addition to the cafe’s eight signature cocktails, the cafe will also serve a collection of wines from France and beyond and of course Kush’s local signature brews like their very own Kaptain Kush made by Tank Brewing Co.

The restaurant, very much like the hotel, revitalized an existing diner space to make what is old new again. Originally built in 1957, Selina Miami Gold Dust, is an iconic Motel Landmark. MiMo neighborhood along Biscayne Boulevard, was once “The Motel Capital of Miami” and has had some famous residences along the way, as in 1961 Hugh Hefner opened up his first satellite Playboy Club directly across the street. Selina, which restored the old motel and opened the property earlier last month, fuzed the iconic retro vibes of Miami’s past with the exciting energy and strong artist culture of the present.

In addition, later on next year Matt and Selina will be opening  Don’s 5 Star Dive Bar below the cafe. This bar is named and themed after famous Miami Don’s from the 70′ & 80’s and is scheduled to open in early 2021. @selina @cafekushmiami