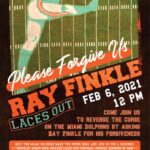 In honor of The Big Game, Hialeah’s hotspot, Kush by Stephen’s & La Cocina Cocteleria will host their second annual “Please Forgive Us Ray Finkle” in combination with the kick-off of their new flea market concept, Vintage Flea. The brainchild of KUSH Hospitality owner/operator, Matt Kuscher – whose concepts are rife with pop culture references – this shindig pays homage to the movie Ace Ventura: Pet Detective (which was shot in Miami). In the film, Miami’s team mascot and players, including Dan Marino, are abducted by a crazy former player, Ray Finkle, who blames Marino for the downfall of his career.

At 12PM on February 6, KUSH will be honoring Finkle, hoping that he reverses the curse he has laid upon the “DolFans” (Miami Dolphins Fans). With the belief that if they show Finkle some respect and reverence, he’ll lift the hex put on the Miami Dolphins allowing them to make another Super Bowl appearance. The Kush Hospitality team is prepared to do this every year until the Dolphins have their day in the sun. This is a fun, FREE and socially-distant event that will include a recreation of Ray Finkle’s bedroom, Dan Marino pinata and card burning ceremony complete with complimentary football-shaped cookies for all guests at 3:05PM.