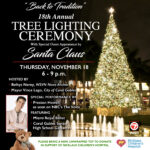 Shops at Merrick Park, Coral Gables’ pristine destination for fine shopping and dining, will present “Back to Tradition,” its 18th Annual Tree Lighting Ceremony, sponsored by Nicklaus Children’s Hospital. One of the largest tree lighting ceremonies and holiday celebrations in South Florida, the event will include the 50-foot tree-lighting and a live performance by South Florida’s own Preston Howell, a contestant on NBC’s The Voice. Attendees will also enjoy a variety of interactive activities, entertainment and a highly anticipated appearance by Santa Claus who will kick-off the festive season.

The retail destination will transform into a winter wonderland with a live performance by Miami’s Preston Howell of NBC’s The Voice who will serenade attendees with holiday favorites. Howell was one of just eight singers to turn four chairs during the blind auditions on The Voice Season 17. The teen accomplished the feat with a cover of “Dream a Little Dream of Me” by The Mamas and the Papas, landing a spot on Team John Legend.

The Miami Royal Ballet and Coral Gables Senior High School Gablettes will add to the festive spirit along with face painters, holiday costumed characters and a photo booth. Attendees are encouraged to spread the warmth of the season and bring unwrapped toys for children in care of Nicklaus Children’s Hospital.

This year’s popular event will introduce a new majestic 50-foot tree with a six-foot-tall, illuminated star topper. The tree is adorned with LED custom colorful lighting, concert grade sound and a snow show. Shoppers can view and pose with the holiday tree through early January 2022. @shopsatmerrickpark

Saturday, January 17, 5pm-8pm – Mondrian South Beach, 1100 West Ave, Miami Beach Angels for Animal Rescue is pleased to present Paws for Prayers 2015, the official kickoff event for BodhiFest Miami. This fundraising event for the benefit of rescue animals will be hosted by Joanna Krupa, international cover model and actress known for her […]